We haven’t been doing much, it has been quite hot here in Ajo, we can’t leave the dogs locked up in this weather. We are hanging the shade cloth off the awning which at least makes it bearable for  everyone. 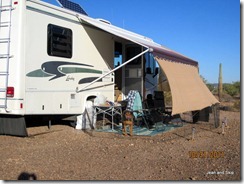 On Saturday we had two visitors, the first one was a man in a van, he drove up the driveway because he thought he recognized the motor home, he was mistaken but he stayed and chatted for a few minutes, he was staying at  Coyote Howl RV park at Why about ten miles from here. He has been coming here for years.

Later a little John deer 4 x 4 pulled up with an older man and lady and their little dog. They also thought we were someone they knew. The man whose name was Doyle said they had been coming here for years, in fact they had camped in this very spot last year.

He gestured behind  the motorhome and said that’s my drinking buddy over there, in fact I brought him a drink. He got out of the atv  walked over and stuck a beer bottle in one of the Saguaro cactus. 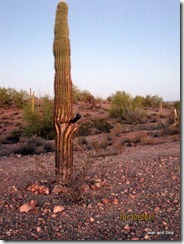 I wasn’t very pleased, and as soon as they left I took it out. I hope they don’t come back, cause I don’t want him doing that to the cactus. 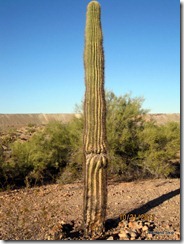 Today  we had two more visitors, I didn’t go out but Skip talked to two men who came on ATVS, one man was born and raised in Ajo, the other was from Alberta. The man from Ajo owns the property across from us, we had walked over there last year http://travelwithjeanskip.blogspot.com/2010/12/dont-know-what-was-happening.html.

The mountain where the cave is. 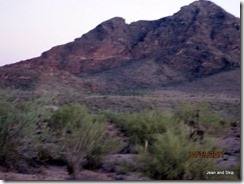 Before he left he asked if we wanted to move over to his property, he said we could stay there as long as we wanted ( he lives in town), Skip told him we weren’t planning on staying longer than the 14 days allowed on the BLM land. Apparently he is looking for someone to watch his property through the winter.

We have been having other visitors too. 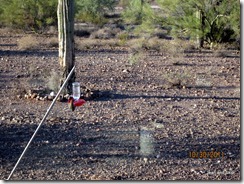 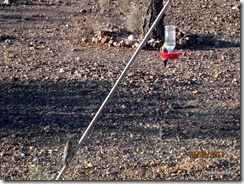 We were told they are cactus wrens.

We checked the weather forecast today and it said only one more day of hot weather, then it’s supposed to be in the 70s.

Back to walking  with leashes for the Boston Bs 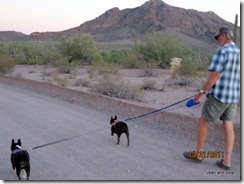