The Grand, Grand Canyon And Cottonwood

Thursday: We got an early start (for us) and by 7:30 we were on our way to the the Southern Rim of the Grand Canyon. There is a $25.00 fee to enter the park, but this was covered by the National Park Pass we bought earlier.The $80.00 pass has paid for itself already.

We knew of a dispersed camping area in the Kaibab  National Forest, which we accessed from with in the park, We are in a pine forest, we can’t see any other campers, although several have passed by our site. And we are a mile and a half from the main road. There is no Verizon signal at all here, so it may be a day or two before this gets posted. 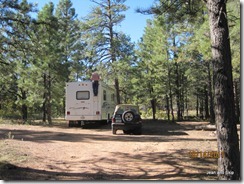 We drove along the rim, stopping at the view points, there is no word to describe the Canyon other than spectacular. 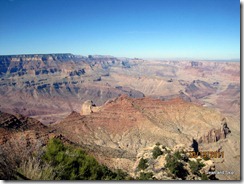 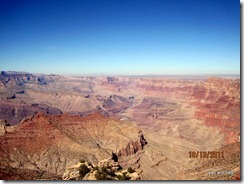 The park was full of smoke, as they were doing a maintenance burn. 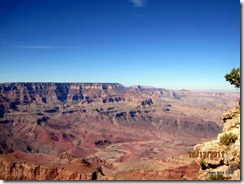 That is the Colorado River winding its way through the canyon.

We stopped and saw the Tusayan Ruin, which is the ruin of a 800 yrs. old Pueblo. It has been left unrestored but there are several parts left. 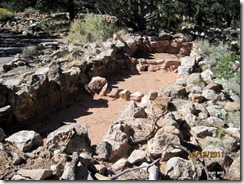 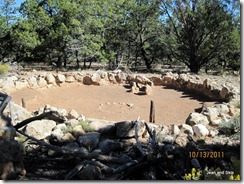 The Kiva is where ceremonies took place, the remains of the posts that held the roof up are still there, as well as the circle of stones that was a fire pit.

The South Rim of the Grand Canyon, is really busy, we knew that it was more crowded than the North Rim, but we were told the North Rim was quite cold already. 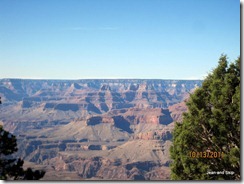 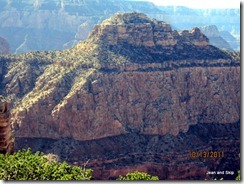 We decided to leave the Grand Canyon Friday morning, we figured the crowds would be getting worse  with the weekend coming. I think next year we will go to the North Rim.

We decided to head for the BLM land at Cottonwood, thirty miles south of Sedona. We are so glad we came here, the weather is warm, our site is  good. 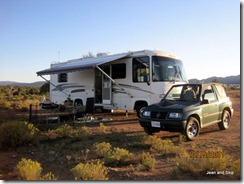 There are quite a few RV here but our site is by its self. Most of the other people are a group from Phoenix that will be leaving tomorrow.

This morning just after 7am  we were sitting outside having coffee when this appeared over the horizon. 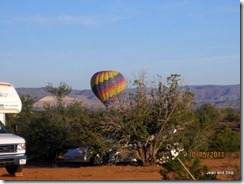 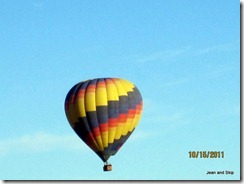 We went into the town of Cottonwood to the Visitors Information Center, and got the skinny on the area. There are lots of hikes we want to do, we will be going to Sedona for sure.

In the distance the red hills of Sedona 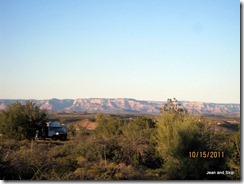 We finally got our satellite TV  working and there is hockey tonight!