It’s been three months since I last wrote, we have been busy being retired I guess, we

had a whole list of things we wanted to do  this spring/summer, and only a few have

been crossed off the list. The weather didn’t help either,some where along the way I have

turned into a fair weather gardener, don’t like the rain and cold anymore. For the second

year  June was miserable, but July has been spectacular so far.

Skip built a bigger and better fire pit, which we have used a few times. Sophie and Louie are funny they quickly get bored with the fire and want to go back in the house, Jake stays with us until the bitter end. 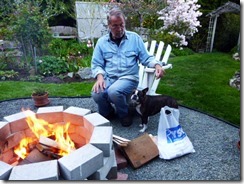 We had an event on fathers day, about 5pm we heard thunder in the distance, and didn’t pay too much attention to it..until it was pretty close. Even then we weren’t  paying too much attention, we just don’t get many electrical storms here. We saw one lightening flash and the thunder  clap came so quickly and loudly, that our house shook,  that was followed by another lightening strike that lit up our house, and the thunder clap was instantaneous. Skip saw a blue flash, I didn’t, I was trying to comfort Louie, who had never heard thunder before. Our lights didn’t flicker and none of the electronics were damaged except our satellite  receivers and two TVs  that were hooked to them.

We had assumed that our provider had grounded the satellite system, but apparently they don’t do that. Their installer came out and put an new LNB on the dish, and when I told him I thought it should be grounded he said they haven’t done that for years. When I persisted telling him it wasn’t fair that we had to replace two TVs and that it could happen again, he said he would be sure to bring an rod out and ground it the next day. It didn’t happen.

We’ve had some visitors 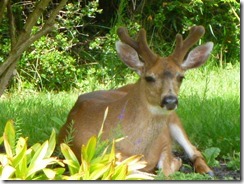 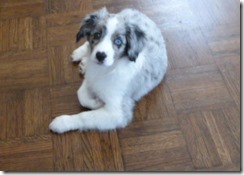 This is Skye my brother and sister in law’s puppy. she came to play with Sophie and Louie 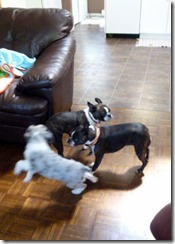 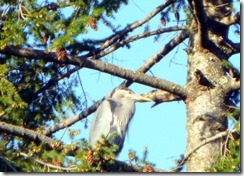 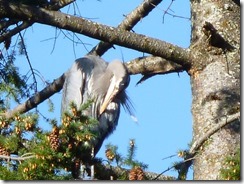 I started this post last Sunday, intending to finish it Monday. On Monday I got a call that my good friend Alma had a heart attack at her desk at work. She was taken to Nanaimo Hospital where she had another heart attack. From there she was flown by air ambulance to Victoria General Hospital. They were able to stabilize her there, but in the morning tests showed no brain activity and she passed a few minutes after being taken off life support. Alma was sixty one years old, with no history of heart problems. I feel so sad for her family, what a terrible shock.

This post has gotten too long, I will try for a shorter more cheerful one in a day or two.