A few years ago  we saw a reference to the Old Plank Road that  was built to across the sand dunes to to shorten the route from San Diego to Phoenix,

We knew roughly where there were preserved remains of the road and on Sunday we  set out to find them.   Grays Well rest area is in California roughly 16 miles east of Yuma  on highway 8, at this time of year there are lots of atvs, dune buggies  etc on the sand dunes  surrounding the rest area.

The Imperial Sand  Dunes are quite high  and we saw these brave souls on the top of  one across from the rest area.

We  drove down the dunes access road from the rest area and at the end of the road we found the
fenced off area that contains about 1500 feet of the plank road. 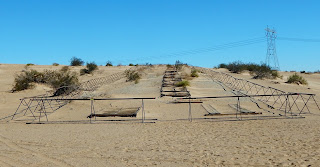 The road was built in sections  and set in place by cranes. The sections were built in town of Ogilby 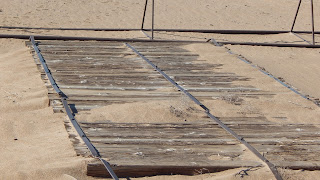 There is an interesting article in Desert Usa   about the building and the demise of the old road, basically it was  just too difficult to maintain and despite a rebuilding by the government it was only
used until about 1926.

We also saw  George and Suzie  this week, they are staying at Pilot Knob RV Parks just a few miles down the road from us. We had a good visit sitting in the sun catching up on all the news. We will see them again  in January  after the big show in Quartzsite.


We are getting ready to leave Ogible Rd, either Sat or Sunday, We are heading to Joshua Tree BLM for awhile, it will be colder than here but everywhere seems to be cold this winter.

Did you know that the Guinness Book of World Records says that Yuma is the sunniest city in the world, not the hottest, just the sunniest.

Like everywhere else in south west Arizona the winds came with a vengeance, the forecast was for the winds to begin at 4 Am, which they did, at 9:30 pm they have finally eased a bit. When the winds blow that  hard there is nothing to do but wait it out. 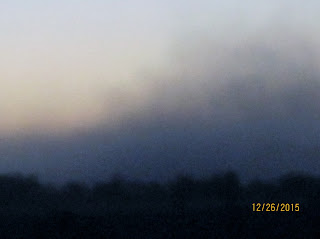 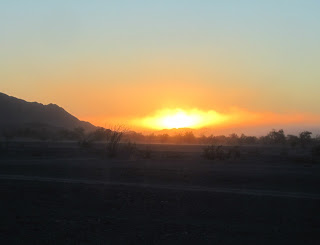 The sun shows a little 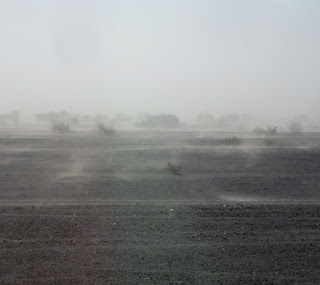 This was our view the rest of the day 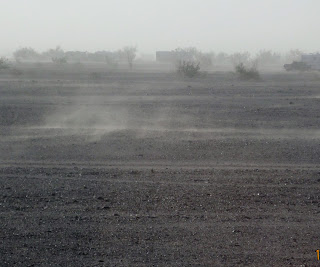 There is probably fifteen RVs out there.

We were lucky in that we are parked along a deep wash on our north side, so although we were rocking in the wind we didn't have as much dust.

We are still on Ogilbe Road and we are so ready to move on, I have another dentist appointment next Tuesday, and then I don't have to go back for three weeks, so we will be on the road to somewhere likely either Kofa  Wildlife Refuge or Joshua Tree Park,  Maybe both.

This is  the Christmas morning full moon, the Nikon Camera's battery was too low so I just used the Canon point and shoot. 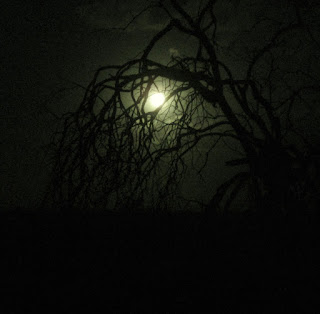 Skip says it looks more like a Halloween Moon.

This was Christmas Eve Sunset 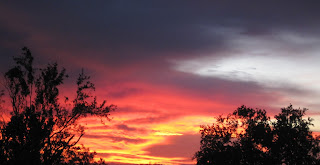 I just lost a whole paragraph on Christmas Day,   So I'll just say it was a good day we didn't do anything but make dinner.

A few pictures of the fire damage at Mittry Lake

When I wrote the last blog I couldn't find all the pictures I took of the fire at Mittry Lake, I still can't upload pictures in Windows 10...last I checked blogger wouldn't work at all in Windows 10, so I am still uploading to Skip's laptop, and mailing the pictures to myself and accessing blogger through chrome.

These pictures give a better idea of the extent of the fire. 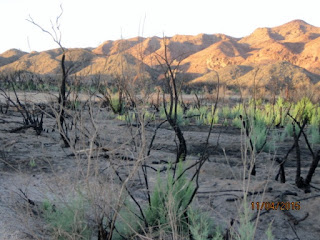 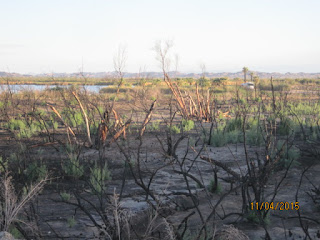 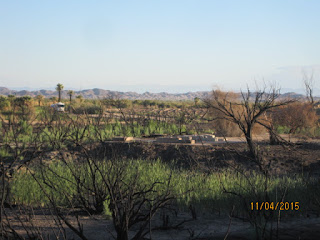 That is our rig in the distance,

I know quite a few bloggers are having problems with live writer, that is one of the programs that
was removed when  windows 10 reinstalled  on my computer.  I  miss it too. 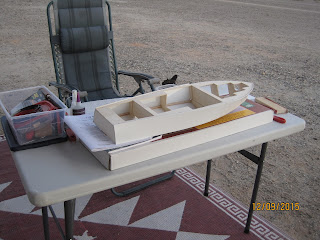 We visited with  Denise on Thursday, she's loving it at the lake.

One more week and  I go back to the dentist, the last of the stitches has finally dissolved,so I must be healed up. One appointment for impressions and one more for the  fitting of my new partial  and I am done.

We are trying to decide where we are going after we are done here. We are really missing Borrego it is probably our very favorite spot, but there are others too,we like Ajo  a lot.

Since my last post we have spent a couple of weeks in Quartzsite , part of the time with  friends from

Nanoose Bay. We went with them to Mittry Lake, we weren't aware that there had been another fire,

last August, this one started at the boat launch and burned towards the campsites. It is quite a mess. 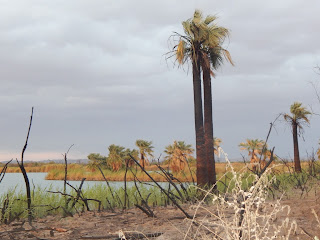 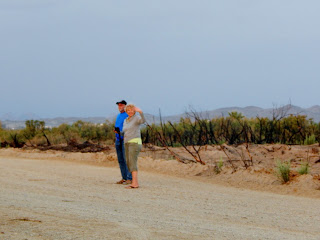 We stayed a few days and after they left for Apache Junction we continued on toward Yuma.


We are staying just off Ogilby Rd. we have been here several weeks and will be here at least two

more weeks. I had a run in with a dryer door, ended up with a bloody lip and a broken  eyetooth. I

made an appointment with Nina's dentist, Dr Eva Urena .I was  hoping for a quick repair but she was

unable to save the tooth.  So it was pulled two weeks ago and I don't  go back  until  Dec.21.

Her Office is in the bottom corner.

Denise is now at Mittry Lake, and we had lunch with her  the other day. It was so good to see her.

Skip has been working on his model  boat, it is slow going, because he doesn't want to make any

mistakes, and he has had to special order some items. 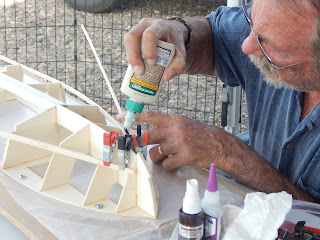 My computer is still the same, I did reload Chrome with no difficulties, but I still can't import

photos, or access the apps that were removed. I believe it has to do with my Samsung computer, not

being compatible with Windows 10.