According to the National Forests Recreation Guide, 62% of the visitors to Sedona, were seeking some kind of spiritual experience. Sedona is believed to be a vortex meditation site.

Skip and I knew  that when we visited Sedona we wanted to hike on one of the trails where the energy vortexes were the strongest. We picked  Boynton Canyon as it seemed to be more remote than the others, and we felt it would be less crowded. 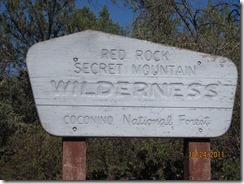 We started along the trail and soon we heard the sound of chanting, there was a group of maybe 12 people  in a circle meditating, the collective ommm filled the air. We stood quietly listening for a while and then we turned up the path towards the Boynton Spire. 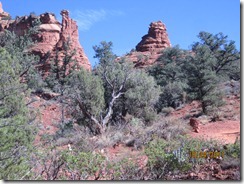 We had only gone a hundred yards or so when the air was filled with the most beautiful music, we looked up and  saw this. 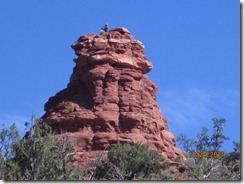 A man sitting on top playing a flute, beautiful  notes floated down the valley, it was the most amazing experience.

We couldn’t see him sometimes, but we could always hear his music. 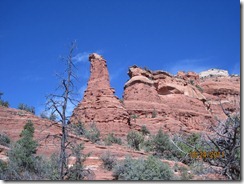 The path led us right up the cliff below him. 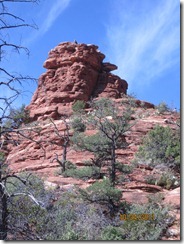 The green valley below 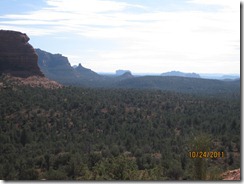 We climbed as far as the path  went and there he was. 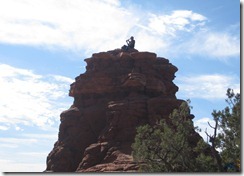 We sat on the rock below him for almost one half hour, listening as he played his music.

The spell was broken by a group of young Italian tourists, shouting to each other as they climbed the rocks. He finished his tune, packed away his flute and climbed down from his perch. When he approached us, I said to him that was lovely, we could hear you from the bottom. He said  yes, it seems to carry forever, I said it was magical, then he said would you accept a heart?, and gave me a red stone heart 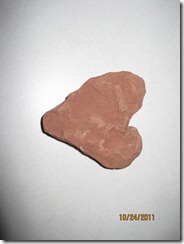 It was a wonderful experience, and whether or not a person believes in spiritual vortexes,or energy vortexes we both felt we had experienced something very special.