Enjoying the sun and a trip into Borrego Springs

We didn't do very much at all today, took a ride into the town of Borrego Springs, it is quite a nice little town, with an airport, a golf course and a tennis court. There are half a dozen restaurants, and a small mall.  We went to visitors  center which was really neat, and bought a book on the Anzio Borrego State Park that lists all the areas of the desert and the day trips and hikes to take. the area we are camping in is in the bad lands not far from Peg leg Rd.  There are about a dozen RVs around us spread over about a square mile. Our closest neighbour road over on his dune buggy to say hello. He's a seventy year old man,who has been coming here since 1962, he and his wife each have their own dune buggies, we saw them go out for a ride this afternoon. It was warm here today around 80F at noon, sooo hard to take.

When we left Bakersfield yesterday morning we drove to the city of Barstow, we were tired of the I-5, it is in such terrible shape, our stereo actually fell out of the dash, so we took highway 58 which was way better, we drove by Edwards Air Force Base, where the shuttle lands sometimes, it was right across the highway from Boron where they mine Borax, one of the cross streets was called 20 Mule Team Road.

At Barstow we took  highway 247 which was spectacular, we went through the Ord Mountains, where we saw a huge wind farm, it was amazing, windmills everywhere. 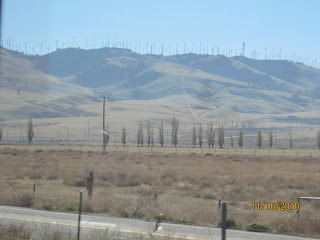 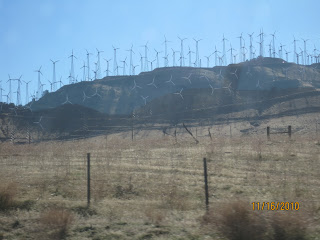 the pictures aren't that great because we were moving but you get the idea.

After we passed through the mountains we had a long windy road to the Lucerne Valley, there so many abandoned houses through this part of California, very sad actually, and this is where I saw the naked lady, there was a house with no windows left in it and this woman was standing in the doorway starkers,
with her arms up over her head, she just stood there and watched us go by. Skip almost drove off the road when I told him.

Hope it doesn't get too cold this week, I see they are forecasting snow.