We left Hickiwan Trails yesterday, filled up the propane at Why, and headed for Organ Pipe Monument, we were  assigned a spot in a row by ourselves. 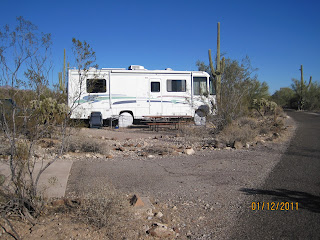 The sites are fairly small with a picnic table and a grill. 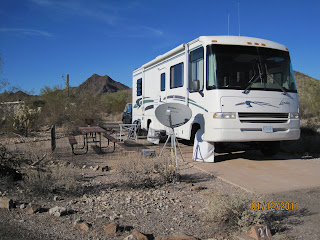 We checked out the amphitheatre, where they give talks in the evening, last nights was on the birds of the desert. 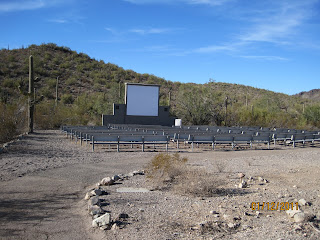 There isn't many places that dogs are allowed, one being the perimeter trail that edges the campground.
We attempted that trail last night, I don't know who decided it would be a good place to walk dogs, it is about two feet wide, and  edged by cholla cactus. I had both Bostons on short leashes and while I was trying to keep Sophie away from the cactus, I  stepped on one of the loose rocks and fell, I don't know how I hit the ground more than once, but I did. Skip said I was tumbling. All I know is it hurt like hell and I was sure glad no one else was watching. Then I noticed poor  Louie, I hadn't let go of the leashes and I guess I dragged him into the cactus. He had a big piece stuck on his face, with most of the spines under his chin. 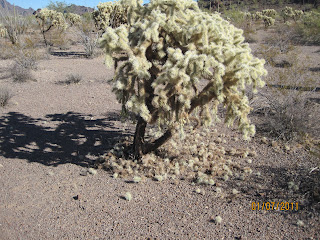 They drop pieces on the ground 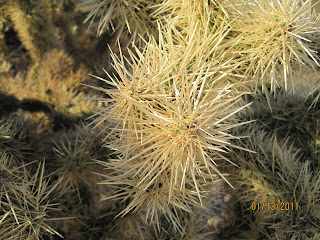 
Skip carried him back to the RV, and held him while I took them out, I had gardening gloves with me,
so I was able to grab them  and pull them out. He was so good even though it must have really hurt, his poor little chin and neck were bleeding. And I have bruises all over.

So while we are here, they will have to walk through the campsite  and along the roads. We will be heading towards Tucson  on Saturday, we haven't heard when they are shipping the new top for the tracker, but we will head that way, and find somewhere to stay until we can pick it up.

We didn't do much today, went for a short drive to Lukeville, where the border crossing in to Mexico is.

Saw the border fence for the first time. 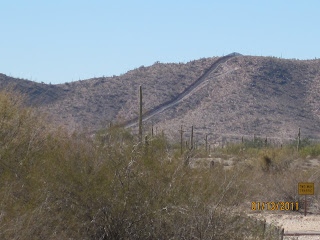 And the cool fainting Saguaro. 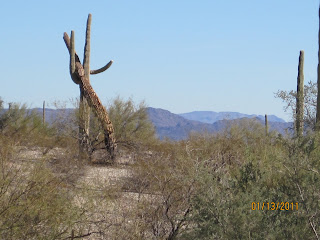 He had a buddy to catch him.