So Monday morning I turn on my HP lap top, it lit up for about 10 seconds and turned itself off.  Through out the day I tried to get it to turn on but no luck, at one point it stayed on long enough for a message saying the start up thingy had been corrupted by the softwear I had recently installed. Then it turned off. This was the second time it had done this.

Tuesday morning we drove in to Indio, to look for a new lap top, we went to Costco first but we couldn't find anything in our price range. We found the Best Buy store and we found a lap top we liked. It is a Samsung. It has Windows 7 which will be a whole new learning thing, plus I have to get used to a new touch pad...that is the worst thing, I keep having pages disapear, I am typing in the middle of sentences four lines up from where I want to be.

In the mean time all my pictures  are on the other computer and I can't access them, the Geek Squad could have got them for me by taking the hard drive out, but I'd rather pay my brother to fix it
and we will be home soon.

On Monday we hiked up Ghost Moutain again, they must have had a lot of snow, the road through Blair Valley was a mess there was actually running water on it. 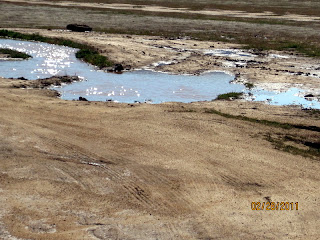 There were patches of snow on the way up the trail 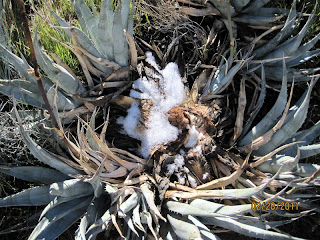 The view from the top was spectacular with the snow topped mountains all around. I have pictures that i would love to show but for some unknown reason I can't get them on this page. It has taken me about four hours to get to this point, I started this last night, could not get any farther. I hate windows 7, not dislike HATE.