A Walk Across The Dry Lake Bed a Bit Disappointing

Our neighbour  Martin told us about the remains of a homestead across Clark Dry Lake Bed. The homestead is hidden behind a grove off Tamarisk trees. He said that there were Great Horned Owls there too.

We didn’t decide to walk across the lake bed until noon,we packed a back pack and off we went.

The lakebed from our site, the Tamarisk trees are barely visible against the mountain 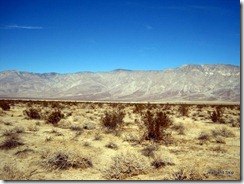 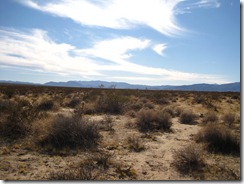 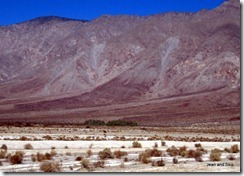 There was water on the lakebed in several places. 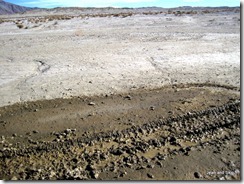 There are signs everywhere saying not to drive on the lakebed but I guess some people can’t read.

There are several of these structures on the lakebed, we have no idea what they are. 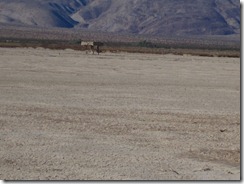 As we neared the other side of the lakebed there were small hills and sand dunes. 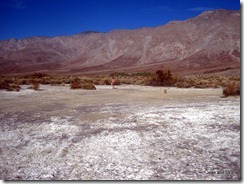 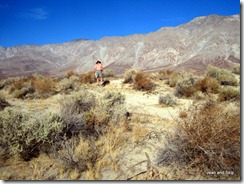 And finally the Trees 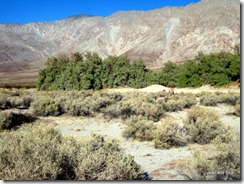 The Trees were beautiful, some half covered with the drifting sand. It took us almost two hours to reach our destination, we had to count on two hours going back, which didn’t leave us a lot of time to look around. 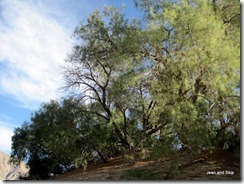 We walked around the grove and saw some evidence of a homestead. Apiece of tin roofing. 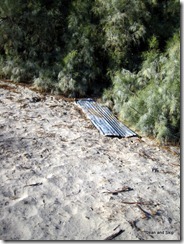 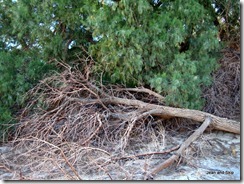 there was a great fluttering of wings and I looked up to see a bird with a huge wingspan flying out of the tree. Skip was so excited until he realized I didn’t get a picture of the owls, he said there were eight to ten owls and  he couldn’t believe I hadn’t got a picture of them.

I gave him the camera and I went to the other side of the grove to see if they would fly back towards him. I did see one leave the trees, he was just beautiful as he flew over my head. We walked around the grove several times but the owls were just to well hidden, or they were smarter  than we were, Perhaps both. 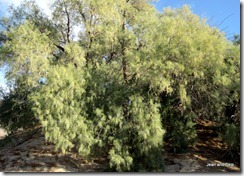 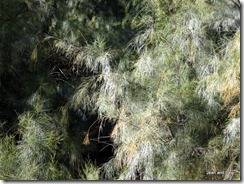 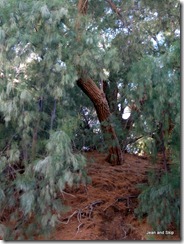 We had to leave the trees and head back to our motorhome, we had had a long walk and we sure didn’t want to be trying to find our way in the dark.

We came across this interesting footprint on the way back. someone is pretty brave. 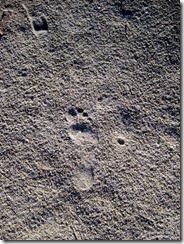 We were glad to finally see our campsite 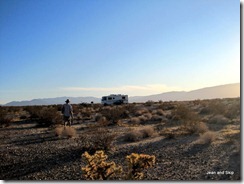 We saw Martin when we got back he said it was four or five mile walk to the trees, so we walked almost four hours, between eight and ten miles and didn’t get a picture of the owls or see what’s left of the homestead.

Guess we’ll have to go again.