Boy, That Will Teach Me

Yesterday I wrote that at least the wind wasn’t blowing, guess I spoke to soon, it started blowing with a vengeance through the night and is still blowing at ten o’clock Friday night.Wind and driving rain kind of makes me wonder what I am doing here. We did go out for lunch today we went to the Red Ocotillo  at the Palms Resort. It was an interesting lunch, we were told the resort was being restored, at one time, it was called the Hoberg Resort built in 1947   it was a favorite of some of Hollywood's stars,, such as Marilyn Monroe, Cary Grant, Lon Chaney and others. It had it’s own air strip. 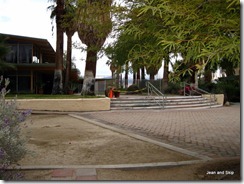 The pool is not heated, although I read it will be heated by solar in 2012.

I  didn’t take a picture of the pool, because it was too cold and blowing, I found this on  the web. I have no idea how to make the picture smaller. It is said to be one of the largest private pools in California.

The original lodge burned down in 1958, it was rebuilt the following year. over the years it was home to a nudist retreat and a detention center. 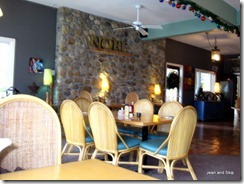 Our food was good,Skip had a burger and I had a Rueben sandwich, the desert was really good. 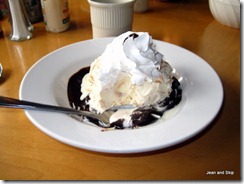 A coconut snowball  for me 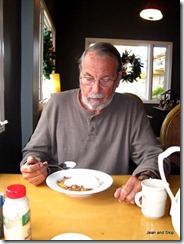 We were glad we went, the service was a little slow, but we weren’t in a hurry so it didn’t matter.

I couldn't post this last night so am trying again today Sat
Posted by Jean and Skip at 11:31 AM