Ogilbe Rd To Mexico To Borrego

Our last few days on Ogilbe Rd. were pretty eventful,  on Sunday  we watched our team the BC Lions beat the Winnipeg Blue Bombers for the Grey Cup. We had  plans to go out for dinner at the Golden Corral, so as soon as the game ended,we got in the tracker to drive the 15 miles to Yuma. About 5 miles down highway 8, we were pulled over by the highway patrol, our offense…a headlight out. The officer said to get it fixed and take the ticket  to a police officer to get it signed off, then let the Winterhaven CHP office know.

Getting stopped made us late for dinner, but we figured we would have an hour and a half  for the buffet……we were just about at the restaurant when we realized we had forgotten about the time change and it was really 8:30 not 7:30. That put the kybosh on the  buffet, so we went to Carl Jrs. for a burger that was awful.

To top it off when Skip fixed the light and got it checked by the sheriff it cost $25.00.

We bought the dogs a new soccer ball, but it didn’t last long once Jake got hold of it. 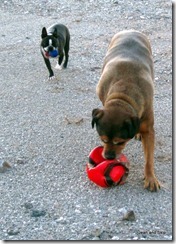 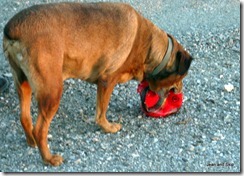 On Wednesday we went across the border to Algodone, Mexico, we left our site around nine a.m. and drove  to the border, where we parked and walked across into Mexico .

Algodone isn’t very big, the area where the vendors are is about 4 square blocks,it was colourful, busy and loud, There must have been forty dentists and almost as many eyeglass stores. Many of them had people standing outside trying to get you to go in there store. 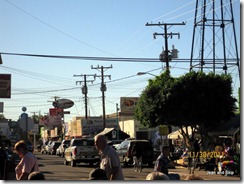 We walked through the area where the vendors set up their stalls,and bought a few things, Skip did the bargaining, I think he did pretty good. 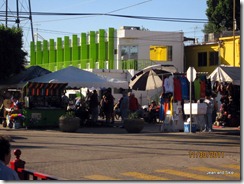 We didn’t stay long I think we were back in our RV by 11 o'clock.

On Wednesday afternoon we decided we would leave in the morning and head for Borrego Springs. We were on the road by 8:15, we stopped in El Centro at Wal-Mart and at Costco for groceries, and despite the horrendous winds  by 1:30 we were  parked  at Clark Dry Lakebed. We were here twice last year, this time we parked in a different spot, 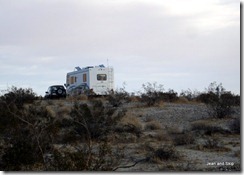 Today we went to the Farmers Market at Christmas Circle,and to the fruit stand where we bought a 10lb bag of grapefruit for $4.00.

Gay and Martin who we met last year are here already. They are from Sidney on southern Vancouver Island. 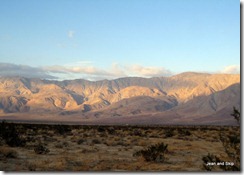 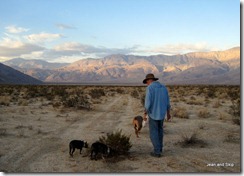 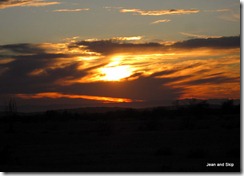 Borrego is one of our favorite places to be, so we think we will stay for a while.