Today was our fourth day on the road, and we are four miles from Jackpot Nevada.

Tuesday we took the ferry from Sydney to Anacortes WA , we go through US Immigration before we  board the ferry, they were friendly  asked the usual questions and we were done. The ferry ride is three hours, with a stop at Friday Harbour on San Juan Island. 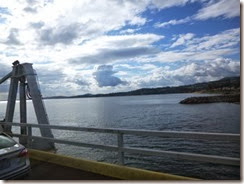 Do you see the guy in the hat watching us board? 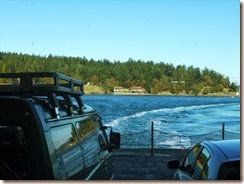 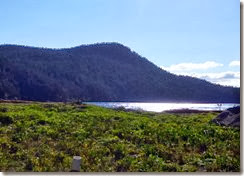 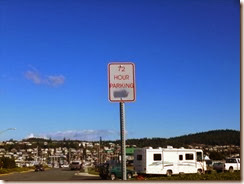 We stopped at Marysville for the night Tuesday and then after a trip to Costco for a new GPS, we headed for Oregon, using secondary highways we managed to avoid Seattle, Tacoma, and Portland and we headed east  on highway 84 along the Columbia River . 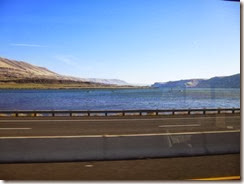 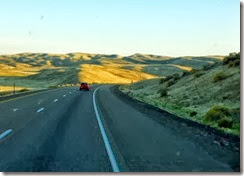 This was the first time we took this route and we liked it a lot, the traffic was light, and we were lucky to have perfect weather. 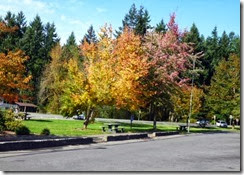 We stayed at this rest stop Wednesday.

Our plans were to go to Utah, and explore the area around Moab, even with the National Parks closed we  knew there was still lots to see.  Then we were going to   Comb Ridge outside of Blanding, where our friends Gay and Martin were camping. Our plans changed when we got an e-mail saying it was freezing there at night and wasn’t very warm in the day time, They have moved on to Overton  Nevada where there is a big BLM area not far from Lake Mead.

It’s disappointing not to be going to Utah, but we knew that we were leaving  a bit late in the fall and that weather might become an issue..

Tonight we are staying at a BLM  area just outside Jackpot Nevada, we are the only ones here, there is nothing attractive about it, but the only alternative where Jake would be welcome was a casino parking lot, which doesn’t work very well for walking dogs.

Tomorrow we will head south and probably stay at Cave lake SP south of Ely Nevada.