Last time I posted we were in Island City, Skip had checked the tire pressures before we left Lewiston that morning. One of our back inside tires was quite low, the ranger phoned around to see if we could get someone to look at it. The only  place open who was capable of looking at it was Wal- Mart in Clarkston. Turned out they couldn’t  take it off so they filled it for us  so we could get to  Les Schwab in La Grande Oregon. We set our GPS and off we went, the route the GPS chose was highway  129.  It was unbelievable, a series of switchbacks that went down a mountain side for miles and then up the other side. From the passenger seat of a class A motorhome it was breathtaking. We found out later it was called Rattle Snake Drive. There is a video on You Tube that says there are 300 turns in 9 miles. I never counted nor did I take any pictures, cause I was not letting go  of the edge of my seat for anything. We spotted a Wal –Mart in Island City and parked there for the night. 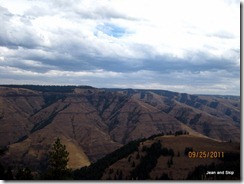 The next  day we went to Les Schwab and found out there was a bulge in the sidewall of the tire, and it could have blown any time. We ended up buying two new tires.

We spent Monday night in Farewell Bend State Park just outside of Ontario Oregon, we had tried for a spot in a forestry site , but it wasn’t very good for the dogs, a gravel parking lot with no shade. The state park was nice, just like all of Oregons’ ParksWe got a pull through site and just sat and relaxed. 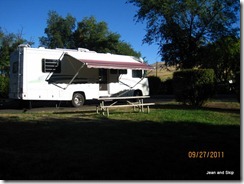 A golf course on an island on the Snake River in Twin Falls, and a whole city block had these dolls tied to trees. 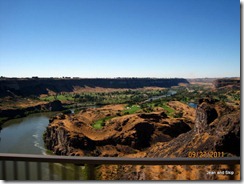 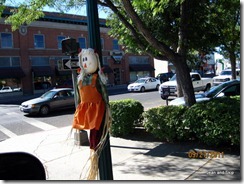 We stopped for the night at Salmon Falls Res. Rec Site. Seven miles up a paved road from Rogerson Idaho, there was a sign indicating the turn to the campground which we missed and we drove across the narrow reservoir. 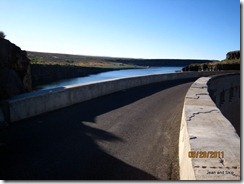 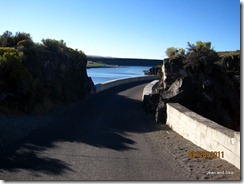 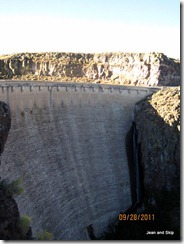 We eventually got turned around and found the campsite, it was really nice. nobody around our site, it was lovely and warm, and the price was right at $5.00, we thought we might stay a few days. 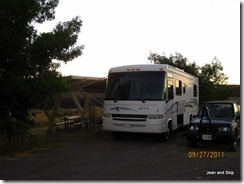 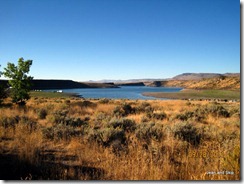 Every thing was wonderful, quiet, lots of room for the dogs… then the flies came, not a few but swarms, we couldn’t  sit outside, when we went inside they covered all the screens. Every time we let the dogs in or out they would come in. We decided to move on this morning and now we are at Cave Lake State Park not far from Ely Nevada.

I haven’t had a chance to take any pictures yet , but it is very quiet and very private, each site is bordered by Juniper trees.

Tomorrow we will be in Utah, where we hope to spend a couple of weeks.

I forgot to say how warm it has been the last week, in Lewiston it was 98F for two days, since then it has been in the 80s everyday, We did have about 10 minutes of rain one day.