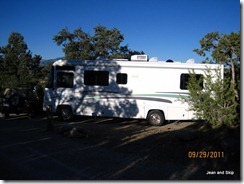 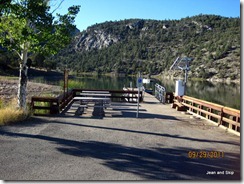 We really liked Cave Lake, we were tempted to stay another day but we were anxious to get to Utah,  We drove highway 93 which is also known as the Great Basin Highway, there was very little traffic and few small towns,just mile after mile of  sage brush and juniper covered hills.

It was so hot we stopped early yesterday at Baker Dam BLM Rec site, we were the only ones  at first, later a couple of  RVs came in, the heat was horrendous, we hung our shade cloth off the awning, which helped a lot. It was too hot to do anything, even cook so we had crackers and cheese for supper. There were a lot of coyotes howling through the night but we didn’t see any.

Today we drove to Zion National Park, we bought a  National Park Pass, which gets us into all the National Parks in the US for a year. We decided to camp right in the park, because there are shade trees. The heat is a real problem with dogs, we can’t leave them when it is hot out. If we had electric hookups we could leave them for a while with the AC on but we  seldom have hookups.

The park is a mad house, all three campgrounds are full, we had a time getting a site in fact we got a site, got all set up and had to move. The ranger had made a mistake and told us to go to a site that  already reserved. she wasn’t nice about it either. I think that she is the first ranger we have met that was rude, most of them are friendly and very accommodating.

We did manage a short walk with the dogs today and the plan is to leave early tomorrow and do two short hikes and  then if it’s cool enough go again in the afternoon.We  are staying here  at least until Sunday, then we are off to Bryce Canyon. 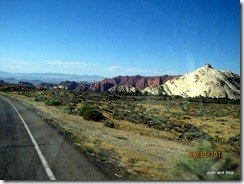 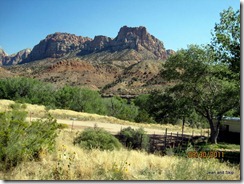 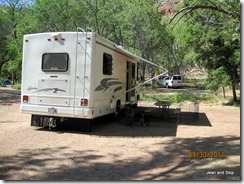 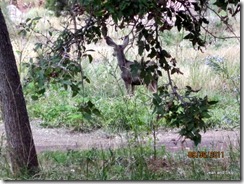 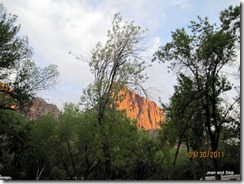 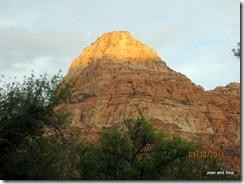 Just looked at the weather forecast and it is supposed to be cooler tomorrow and there is a 30% chance of a shower.. keeping my fingers crossed.