Borrego has gone to the Dogs

We have been  at Borrego for a week now, we arrived in a downpour and took the first available site we found in the Rock House  area. The next morning we looked around and we were basically in a muddy field that looked like a bull dozer had gone through and left piles of dirt everywhere. We quickly packed up and moved over to the dispersed area at Clark Dry Lake Bed, where we have stayed the two previous years. 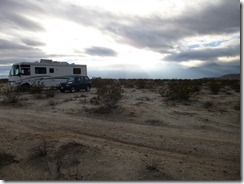 RV Sue and her lovely dogs were camped a little ways away from us. Sue and I  met and talked briefly on Monday,then Skip and I made a trip  to A Thousand Palms to buy a waterless cleaner for the RV called the Solution. We had got the address from internet, however when we arrived at there we discovered that they had moved their operation to Prescott Arizona. It was a nice drive though, too bad I didn’t bring my camera.

Ivan  was  here when we got here, so were Martin and Gay, and Tuesday night John and Nicole pulled in and parked just down from us.

Yesterday the site we had last year became available and we moved  over there, and John and Nicole moved into the site we vacated.

Ivan had his helicopter up and took an aerial shot that is pretty cool. You can find it here.

I love this picture of Spike, 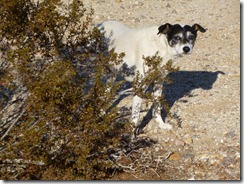 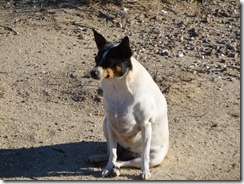 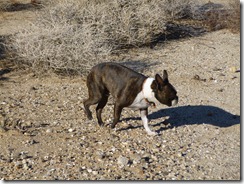 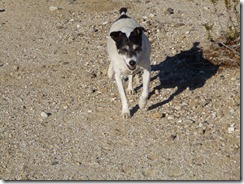 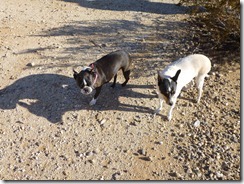 Sue is thinking she will leave in the morning,we enjoyed meeting her, maybe we will see her down the road.