It’s our last day at Ogilby Rd,it has taken us a week to get all our running around done. We are at the same area we normally  park, we almost parked  next to the big wash, but there were quite a few rigs there so we moved  about 1km farther up the road. Ivan emailed the same night to tell us that we had been in the site he’d just vacated and that Wandering Willy was parked across the wash. So we finally got to meet Bill aka Wandering Willie. We stopped  by his trailer on our way to Yuma one day and had a short visit, what a nice man he is.

We were in Anza Borrego for almost eight weeks, at first there were only a half dozen RVs in the area we stay in, between Christmas and New Years the numbers grew to probably 35 or 40. Some people spend the winter camped at the dry lake bed and several of them were very unhappy with the influx of people. 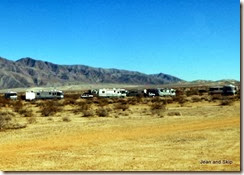 One man put up tape so no one could encroach on his space, and then proceeded to take the fire pits apart on the  site next to him so  nobody would camp there either.

Another camper  put barricades up at the entrance to  his site after a couple of  rvers tried to make a parking spot where there wasn’t one. He would walk his dog past our site every day and we had several conversations about all the rvs

I was quite astounded when I was told that  I was was the subject of a rant by the same fellow, and that it was my fault  that all the people  were coming the dry lake bed  area. He  said that I blogged about Borrego and told everyone to come  and that bloggers were a cult and I was the ring leader. I believe he was talking about a group of  people in Air Stream Trailers who were parked in the site next to us, and the NU RVers  who had a gathering near us. I didn’t know any of them, and they would have no reason to read my blog. 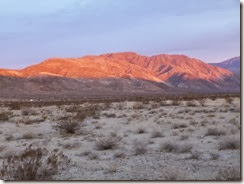 Our friend Martin showed us this, not far from his site, 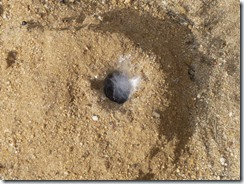 It  is a female Tarantula”s nest the white is her web. I am sure glad she stayed inside. 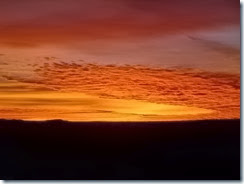 We are off to Quartzsite this morning for a bit.